Zulus! Several of them!

I've painted several dozen 10mm Zulus and British. They are from Magister Militum and are fine figures. I've also been painting Zulus in 1/72, because every wargamer knows the best way to finish a project is to do it in two scales simultaneously! I'm using Jack Scrubys Colonial Rules, very simple and old-school. The mission of the British is to march to the building on the hill and defend it from attack. There are three playing cards for each zulu unit, two are dummies, one represents a real unit. The cards are flipped over when the British get too close or enter the cards line of sight.

A fun first game in this period. The Zulus never ran from rifle fire, but they were so good at ambushing that the British never got more than one volley off at either unit. Once in close combat the superior numbers of the Zulus meant it was just a matter of time until the British were defeated.
Posted by friendlyfungus at 4:52 PM

In the early nineties their was a neat SF game called Kryomek. It features aliens who look a lot like the ones from the "aliens" movies vs. humans. Definetely good fodder for a war-game there. The  Kryomek aliens are nasty little hellion grunts, bigger warrior aliens with weapons, and the huge warmaster who tells everyone else what to do. Most of the humans are nexus marines, plus colonial marines and the elite swat marines. There are also Cyclos, convicted criminals controlled with drugs and pain to fight. The rules are available free in PDF from Scotia Grendel (requires account), and they also sell the figures for a reasonable price. I just happened to discover this game by accident while trolling my favourite internet retailers, and of course in a fit of war gamer enthusiasm I bought more than I'll probably ever use, but at least figures don't have an expiry date!

On to the game: A force of marines, swat marines and cyclos must defend a human settlement from an approaching force of nasty Kryomek aliens. There are three buildings. Kryomek can destroy the building by starting their activation touching the door. If they can destroy two of the three buildings by turn 8 they win. Otherwise the humans are victorious.


A fun game. Kryomek works best with scenarios, it doesn't even have a points system, at least not in the main rulebook. There's an add on book I haven't looked into yet.

I hope everyone had a good 2015 and a nice Christmas. I'm really excited about my newest toys, with even more neat stuff winging its way swiftly towards my painting table through international post. Really looking forward to the new year, happy gaming everyone!
Posted by friendlyfungus at 4:48 PM

Email ThisBlogThis!Share to TwitterShare to FacebookShare to Pinterest
Labels: Kryomek

Napoleon at Pharsalus...courtesy of Donald Featherstone

I may have a new favourite wargaming book:

This book tells you about 15 different battles to war-game from all different periods. But what makes it good for solo wargaming is its format: It starts off with a basic description of the battle, including what forces to deploy and a map of the battlefield. Then it tells you to set up the armies, write orders for your units, and then it gives you orders for the enemy army with possibilities decided by dice. I've never seen this format before but I really like it. And Featherstone helpfully suggests how you can use armies from any period you have to play the games, as few people have armies for every period.

So I decided to test this out with Napoleonic French vs. Prussians. Napoleon will be Caesar, Pompey's forces are the Prussians. I'll be using Bruce Quarries napoleonic rules. Following the guidelines in the book, Napoleons troops have morale and combat bonuses to make up for the fact that they were heavily outnumbered.


In the end Napoleons front line defeated the Prussians who routed. This caused the rear two lines to rout as well, thus winning the day for Napoleon, and this 19th century Pharsalus worked out similarly to the 1st century BC version. A fun game, I love the orders suggested for enemy armies, and I look forward to playing other battles in the book, perhaps with different armies and different rules.

Thanks for reading.
Posted by friendlyfungus at 10:25 AM

The Earl of Oxford leads his men into Ath to fight the recently victorious Boucicault.


Posted by friendlyfungus at 12:06 PM

The French general Bocicault attacks Sir John Cheyney in Ath. Sir John hasn't had time to rally his army since the last battle, but suffers only minor losses to attrition. Robert of Marle takes his army west, hoping for the opportunity to cut English supply lines. Waleran takes his men to Mons but is halted prematurely by the wet weather. The Earl of Oxford heads to Enghien.

I read a recent issue of Minature Wargaming the other day, and it has some simple, fun rules for fighting the 100 days Napoleonic campaign in Belgium. Not having nearly enough napoleonics to do it justice, I transported the campaign to my favourite period of the hundred years war. The colourful map is available on the magazines goodies page, but you need to buy the magazine for the rules.

In this campaign Henry V, along with the Earl of Oxford and Sir John Cheyney, have landed armies in Ghent and plan to strike into France. Boucicault, Marshal of France, Robert Count of Marle and Waleran de Raineval are each taking armies to stop them. The French win by taking Ghent and cutting the allies supply line. The English win by preventing this. Each of the six armies is about 1500 pts using the Warhammer Ancient Battles rules. After a battle the winner permanently loses 25% of his causalties, the loser has 50% lost for the rest of the campaign. Other causalties are only wounded and return for the next battle.

Sir John orders his defence of Ath while Robert marshals his knights to attack.


Big victory for England! England's total causalties were one artillery crewman, while France lost 14 knights. Plus my new cannon killed one knight, but were routed themselves as is normal for freshly painted units. I look forward to my next game in this 100 days/100 years campaign.

Posted by friendlyfungus at 12:29 PM

I've painted a bunch of new French knights, so now I can play 1500pts without having to take hordes of crossbowmen. How will my freshly painted figures do? 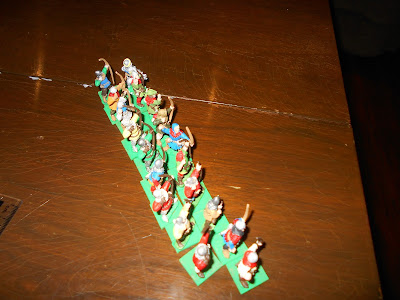 The sole remaining archers unit turns, wheels and shoots at Waleran, taking his last wound. Some much needed points for the English.

Victory to France! The points were 1603 for France to 607 for England. A simple game, but I had fun none the less. Hope you liked it.
Posted by friendlyfungus at 9:47 AM